This page details all announcements made by the Pokémon Company during January 2023 that concern Pokémon Trading Card Game products. Announcements are listed in reverse order from newest to oldest. (Source)

The Love Ball by The Wand Company was released today.

GG45/GG70  Deoxys VMAX has been revealed from the Galarian Gallery of Crown Zenith. Three more cards have been revealed from the Crown Zenith expansion:

The Paldea Collection Boxes and the Pokémon TCG Knock Out Collection released today.

Two Premium Collection Boxes – Klara and Cyrus have been confirmed for release on 24th March 2023.

Eevee V 108/159 has been revealed from the upcoming Crown Zenith expansion set.

Five more cards have been released from the upcoming Crown Zenith Expansion:

The popular Trainer Item, Pal Pad will feature in Pokémon Scarlet and Violet. Last released in the 2020 Sword and Shield Base Set, this card, stamped D, was set to rotate out in April 2023. Pal Pad allows players to ‘Shuffle up to 2 Supporter cards from your discard pile into your deck’ and also ‘play any number of Item cards during your turn. Elesa’s Sparkle 147/159 from Crown Zenith has been revealed. This is a Full Art, Ultra Rare Card. Crown Zenith, the final set of the Sword and Shield Series, releases on 20th January. 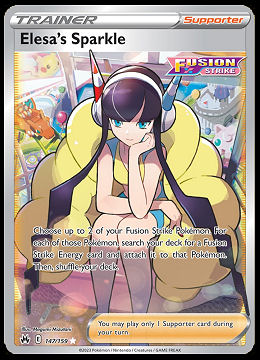 Another card from Crown Zenith has been revealed. Hoopa V GG53/GG70 is a full art card from the Galarian Gallery.